that have nothing to do with knitting!
*Sweetie is back from a week in our old stomping grounds in Central Asia, safe and sound, and I am SO HAPPY! Although being forced to do things like drive myself around, bring my own packages to the post office and run out and buy random groceries myself when I want them was probably good for me.
*Whoever dented my driver's side door so that it won't open more than 6 inches, I usually try not to use such crude language, but YOU SUCK! Because I'm soooo happy to have to climb over from the passenger's side in an ankle length skirt while everyone in the parking lots of the supermarket, Dunkin Donuts, and the JFK Airport stares at the girl in a headscarf who knows how to drive, which is apparently an exotic creature worthy of being in a zoo. (I have had people point and laugh! Although maybe I should mention that that was in New Jersey...)
*Getting a sunburn only on the center of your face, with a pale ring around the edges where your scarf was, looks really freakish. I have to stop doing that.
*Turkish people are everywhere. In the past two days, I have had a car full of my students scream my name while I walked down the street, run into two people I know while buying groceries, picked up two girls from a bus stop and driven them home, run into two other people in the airport, and most memorably had a random Turkish ice cream truck guy sell all of my students ice cream at a steep discount while we waited for our school bus to pick us up from a field trip. Then there was the elderly Albanian guy who stood and watched us for quite awhile on said field trip before asking if any of us was Albanian - and of course, one of the Turkish girls was half Albanian! I've been using the term "Turkish Mafia" to describe this phenomenon but maybe I need something more all-encompassing.
Posted by rahime at 5/26/2007 07:11:00 PM No comments: Links to this post

"6 Flags with a bunch of tweens" wasn't bad. Although towards the end it kind of fell apart. But I did work on this: 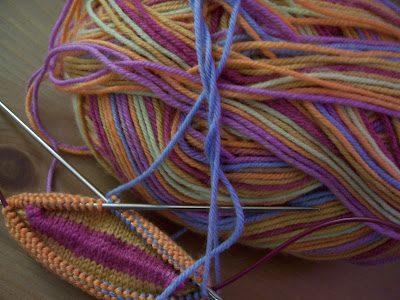 A toe in Regia Silk. The figure-8 cast-on came out really wide this time (I can never tell how wide it'll end up after I've knit the yarn wrapped around the needles), and I think I'm going to leave it that way for now and see how it fits - pointy toes bother me.

The closer we get to the "red" Project Spectrum month, the less I feel like working on my red socks and the more I feel strangely drawn towards blue (intense, rich, royal blues) and orange. It figures. Anyway, the Geranium socks are maybe halfway up the foot, and the Electric Red one's heel has been turned. And I'm shopping from my stash in my head...

I'm feeling really low over the swap socks - it turns out they didn't fit her - too small. They do fit her daughter, but still - I was really disappointed and annoyed with myself. And I'm not sure how to make it up to my swap partner!

We're in the busy phase of school, which is why I haven't been around posting (or commenting, sorry!) lately, and tomorrow I have to take a bunch of tweens to an amusement park - which sounds like my own personal hell. But who knows, maybe I'll have fun... it's always possible, I do surprise myself sometimes!
Posted by rahime at 5/23/2007 08:46:00 PM 2 comments: Links to this post 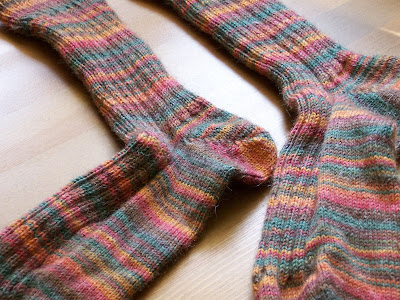 These are Trekking Pro Natura, the new bamboo blend. I really like the texture and look of the yarn: 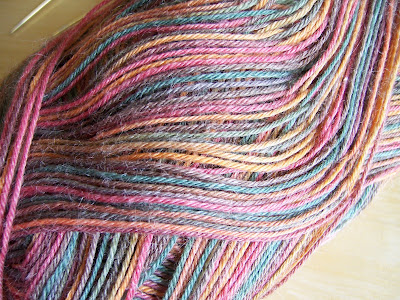 The only issue I had was that it had tufts of what I'm guessing is the bamboo bit that weren't fully twisted into the yarn in spots: 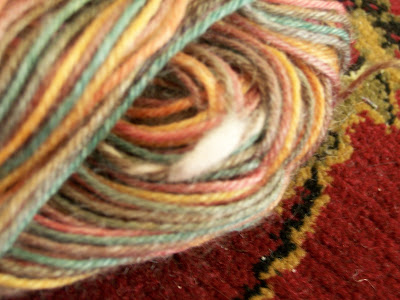 Which obviously isn't thrilling. (That was the worst spot in the whole skein; there were one or two other similar, but lesser tufts.) But I'll still buy and use the yarn again.

Return of the Red

I took some better-lit (whatever else might be said about them) pictures of those socks. 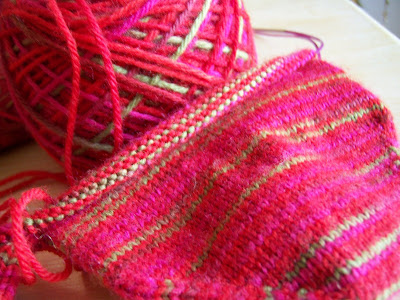 These are Knitpicks Memories (again!), this time in Geranium. They do seem to be striping well - I've found that Memories does really well at not pooling, as long as your stitch count is consistent. The pooling I had on the one Cape Cod sock must have been due to an odd number of stitches on one sock - that's why I'm doing this pair 2 at a time! 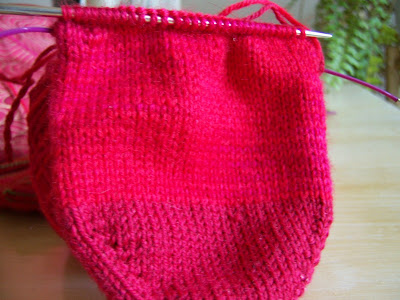 This is fantastically bright - my camera can't handle the electric redness of it. It's Schaefer Anne, and the colorway's named Frank's Folly. (The toe is Louet Gems.) It's striping a little too, the camera just isn't able to pick it up - it varies from plain old red to a kind of electric, brighter than hot pink red. I'm obsessing over the red lately, and it's reminding me of an old coworker who was a little "woo-woo" urging me to meditate on something red when I was having trouble with anemia. Miss you Nuriya!
Anyway, as is probably evident from this post, I'm feeling much much better, and it's looking like tomorrow's the day to drag myself kicking and screaming back to work.

I feel dumb, but after five and a half hours and about $200 spent getting a prescription from a doctor today (ironically, I think I was getting better health care when I lived in the Third World) I FORGOT to take my update pictures while there was still daylight. So sorry for the awful pictures...
I am now officially in a state of Project Spectrum rebellion: 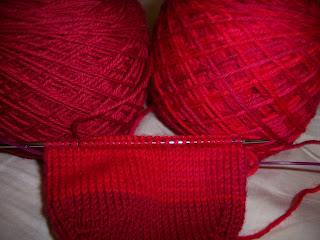 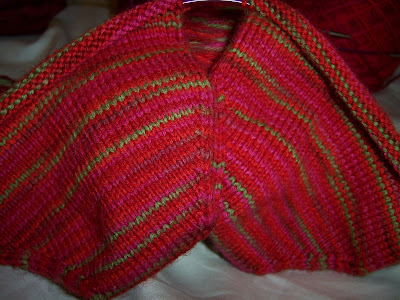 I couldn't resist the red. I'm also obsessing about blue, which I had to force myself to knit during the February/March part. I'm sure as soon as it's June I'll be all over the pinks and greens. For whatever reason (I'm way too stubborn and hate being "told" what to do, is what my Mom says) I feel zero urge to knit the colors when I'm "supposed" to. I guess I'll try to focus on knitting a variety of colors over the entire project instead!

Well, I did the heel flap successfully! Except that now I can't fit it on. I'm persevering, since I often can't get short-row heeled socks on right after doing the heel either - somehow continuing up the leg makes it go on better. I hate ripping back, so much so that I might find someone they'll fit to give these socks to, even though they're only about 33% done. Beh. At least now I get how heel flaps work!
Posted by rahime at 5/11/2007 11:33:00 PM No comments: Links to this post

I finally have a picture! And the swap sock is done, too. 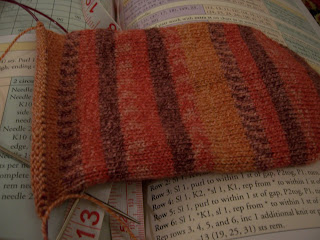 I decided to try and make this sock (which I've been calling Candy sock, because the colors remind me of some half-remembered kind of candy) with a heel flap instead of a short-row heel, so I'm following the instructions in Sensational Knitted Socks even though I can't get my head around how this is all going to work - I always was bad at spatial things. I'm trying to just have faith and do it.

I've also been off work since partway through Tuesday - I got sick, AGAIN, and have a disgusting hacking cough and no voice. Fun. But I should have seen it coming - my body pretty reliably gets sick when I'm overloaded and overwhelmed, and forces me to rest. So I am!

but after saying that I was having a nervous breakdown, I figured I'd better post something. There's no real progress on anything but the swap socks, which are not-yet-to-be-pictured. I don't think I've made any progress on other projects - the motivating factor of my nervous breakdown being feeling overwhelmed by work, I've been too busy.

So far this weekend I've spent my free time on housework, cooking, moving furniture with Sweetie (which prompted more tears when he asked, while shifting part of my stash, if I was going to use up all my yarn before buying more - honestly I don't know what's wrong with me, but I burst into tears and sobbed "You don't like my yarn!" And of course, poor guy, he swore up and down that he did like my yarn, that he loved my yarn, so I would stop crying. Sigh. I don't know what's with me but I can't wait until it's over!) and going through household junk to recycle. But I'm planning on getting some knitting done tonight so hopefully next week won't be as boring a blog week as this past one was!
Posted by rahime at 5/06/2007 06:41:00 PM 2 comments: Links to this post

Oh, and I forgot

... to respond to people's comments about that cast-on and cotton sock. I don't think I'll ever use another cast-on again, that one is just really ingenious (maybe Turkish is better!). And the yarn is Lana Grossa Meilenweit Cotton Fantasy, I think. Like I said, I just did housework so I think I "cleaned up" the ball band, but it's Lana Grossa cotton and it was on sale at Webs and probably still is. They had a lot of other attractive colors too.
Posted by rahime at 5/02/2007 02:20:00 PM No comments: Links to this post

And a nervous breakdown!

I have almost no new knitting to show, because I'm basically having a (work-related, and possibly hormone-related) nervous breakdown this week, but today they sent me home early to "rest" and I managed to actually get some housework done! and also noticed this new sock pattern. I feel really good about having an actual pattern in my "queue" rather than just yarn. And now I can ponder which yarn to use for it and hum to myself during my "mental health vacation" and be glad that I'm at home, alone, with no one to make me feel self-conscious about my eccentric nervous-breakdown behavior. Sigh.
Posted by rahime at 5/02/2007 02:12:00 PM 2 comments: Links to this post