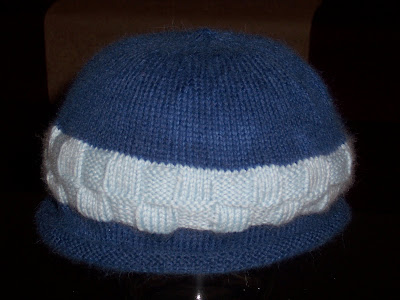 I wanted to post a progress pic, and instead managed to post it as an FO. I knit this in slightly over 24 hours - it's currently blocking on an upside-down bowl on top of an upside-down jar. It's knit out of (juuuuust over one ball of) Knitpicks Ambrosia (which is AMAZING) in Night Sky, with the basketweave stripe in Lion Brand's cashmere left over from Sweetie's scarf. When it's done blocking I'll post a modeled pick with the scarf.

It may be a bit short, in which case I'll add earflaps with the barely touched other skein, but I'm hoping blocking will take care of that. Although earflaps would be so adorable that I may just have to add them anyway - I want to put a bobble on the top, too, if Sweetie doesn't object.