Those Trekking socks which Hilary so kindly admired (by the way, those other socks were Claudia's Handpaint Sport and the toes/heels were sportweight Lorna's Laces! And I'm starting to think I really need comments I can answer with e-mail...) - those socks have problems. Well, one problem, which I artfully disguised with photography when I posted them and tried to pretend wasn't there.

Why am I confessing now? Well, those craftalong socks I haven't posted yet are done, and they too have problems. I'm starting to think the past several weeks of my life have been a time of general imperfection, and that it's time I face up to it and try to do better. So I'm vowing to try to do whatever I do with more attention, because these sock problems are getting ridiculous. 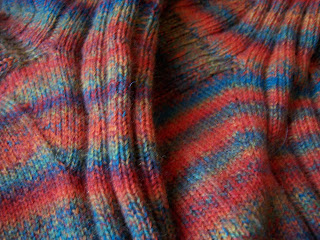 If you've ever considered doing your gussets wrong as a design feature, I can tell you there is apparently a reason (beyond the aesthetic) that they're placed how they are - the messed up sock is a huge pain to get onto my foot. It will go on my foot, just not very willingly. Why didn't I rip? Well, by the time I noticed (and yes... if it's occurred to you to ask, this was the sock I was knitting while absorbed in The Deathly Hallows!) I was simply too lazy to rip all the way back. I didn't think it would matter that much.

It did. I think, at some point, I'm going to have to learn to frog.

A little more for good measure 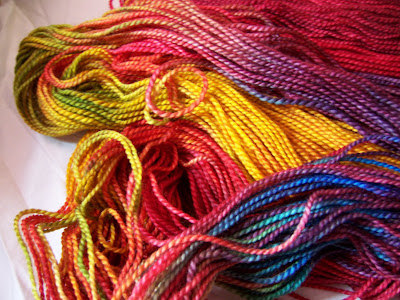 Does it get more cheerful than that? That's Fleece Artist, and it turns out that when you buy FA from a store instead of online, you don't know what colorway it is! Their dyelots vary significantly, so I'm not sure- is it Jester? is it Rainbow? I guess all I really need to know is that it's so beautiful it calms me right down to look at it.

I've been putting in a lot of hours at work this past week (you thought I quit? So did I! I guess it wasn't my fate to leave quite yet. The main reasons for my wanting to leave have been removed though, so I have a good feeling about it - I really do love my job) but I'm free for the rest of today and I'm taking the next day and a half off. I've felt slightly battered by my personal life lately (not Sweetie - he's my rock, just want to make that clear!) so I think it's time to knit and nap and lick my wounds.

Oh, and next time I have a major confession to make!

I need a little cheer today 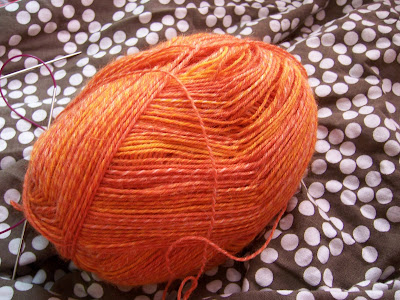 and just thinking about an orange this bright helps. 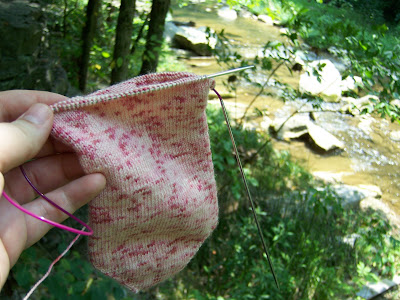 There is the promised knitting content! That's also at Natural Bridge (Virginia). More about that sock later. I promise, when I do catch up with my knitting there will be a lot of it!

Today is Independence Day for the Republic of Rahime - I took the bus! And got to work, all by myself! Backstory: the buses in my hometown are pretty bad, and I never ever used them ever. I was afraid of them. The buses in Brooklyn are nice, and safe (I think) but I still found them intimidating and developed a sort of phobia of the bus. So, in two years, I've never used them (okay once but I was with a friend so it doesn't count). But this year I've realized it's just too impractical (and uncomfortable, when I have to wait) for me to rely on Sweetie to drive me everywhere. So since last week I've been trying to psyche myself up to take the bus to work, and today I finally did it! And it was really, really convenient, comfortable, and easy. I had to fight the urge to stay on the bus and see where it went - now I'm frantic to get a bus map so I can see where else I can go! My mind is full of possibilities. Next step: knitting on the bus???

I can't believe somebody identified that statue so fast. Congratulations, Bryony! I am definitely sending you a prize, because that was awesome. I just need a little time to get it together. (It was at Natural Bridge, Virginia, a much more historically legitimate attraction than some of the other destinations associated with it. The statue was an ad for Dino Kingdom, and you should definitely click on that link for an entertaining anecdote about the role of dinosaurs in the Civil War.)

And now I can post my Foamhenge pictures! I was so worried that if nobody guessed the location of the cowboy statue, I wouldn't be able to show y'all Foamhenge, and now I can (assuming Blogger cooperates). In case you were wondering, here's a general statement of fact and purpose: 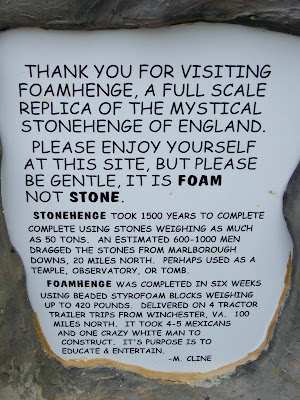 Here is part of it, looking Stonehenge-like: 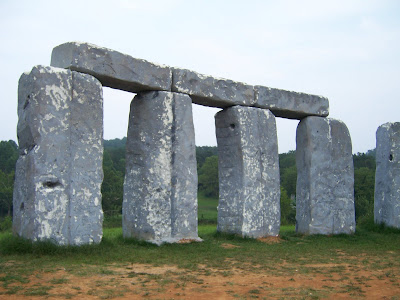 And here are two theories regarding the construction of the original Stonehenge: 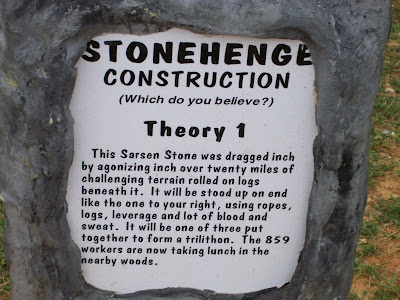 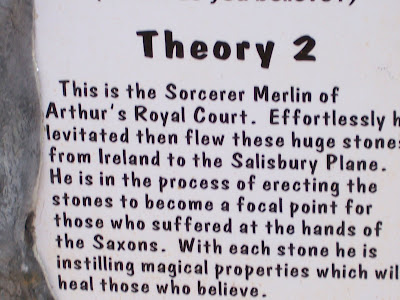 And a statue illustrating the second theory (there was one of the first too, but it wasn't quite as compelling somehow) 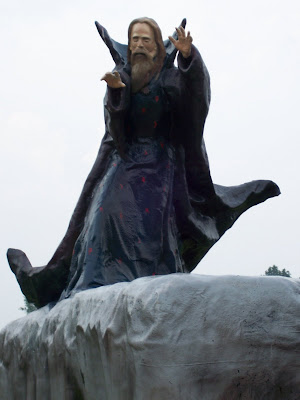 And no, I don't think those things are considered exactly normal in the US. Taking pictures of them was a source of much hilarity for our group, at least. Sadly, I don't know if any of the dinosaur statues within the "Dinosaur Kingdom" part of the Natural Bridge complex of tourist attractions had cowboys riding them, because we didn't go there - we just hiked to the bridge and had lunch and giggled at things like the Instant Civil War in the gift shop. Oh, and went on possibly the most uninspired cave tour ever.

I'll put some knitting in my next post, promise!

I really really did. And then I picked up my purse on the way out the door to work, and something in my neck went (my purse is not that heavy!). And I went to work anyway, and it hurt, and I took some painkillers, and it got worse. So I came home early and I can't move my neck, and it's cloudy today so there's no picture-taking light. (Not that those things are related...bear with me, I'm in pain.)

So I had the bright idea to just post some pictures from my recent vacation, and set up the camera, and was briefly very confused, forgetting that Sweetie kept borrowing my camera while we were on vacation - there are many pictures on there I didn't recognize, not having taken them myself, many of them featuring my own unsuspecting rear end as I was walking around at various tourist attractions (is that something all guys do? Or does my Sweetie just find stalking his own wife endlessly entertaining?). Once I realized what was going on I felt much better... they're so hilarious I would post one, if it weren't for the fact that I wouldn't be able to control who actually ogled my rear on the internet.

In lieu of that, here are some wacky things we encountered. 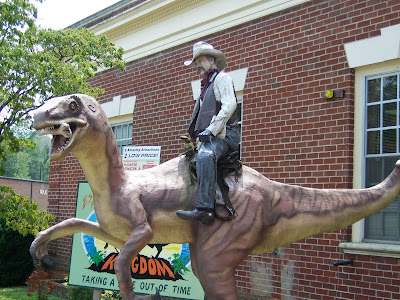 A cowboy riding a velociraptor! Double the excitement of regular cowboys and regular dinosaurs! (If anyone [who wasn't on vacation with me] knows where that is, by the way, tell me within a week and I will send you a prize. I don't think I have such an extensive readership that I need to worry about multiple correct responses, but if I get them I'll either send smaller prizes or randomly pick winners. Um, duh, but I just realized that since I provide no e-mail address, the only venue for answers is comments, which will then be visible to everyone, so I'm changing it to "the first correct answer, ever, will get a prize." Still only applicable to people who weren't actually with me at the cowboy-dinosaur statue.) Then we have 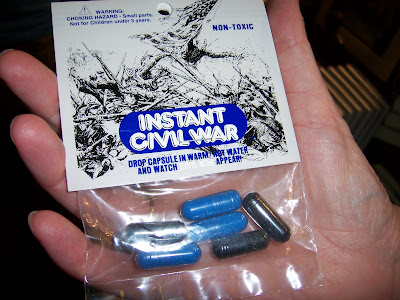 We weren't seeking out weirdness, exactly. There is more of it, but I'm afraid posting it would give away the whereabouts of the raptor-riding cowboy so I'll wait. I did knit a little too - and I have pictures, but the camera battery just died and my neck can't stand any more computer.

I got my computer back!

Oh happy day! (And my camera, and ipod cables, and my diary and the yarn and beads for a second sock I desperately need to knit...)
So of course I got up at 5 am, brewed some hotel-room coffee (double strength - those little packets of coffee they give you are always so disgustingly weak), and gorged on all the knitting blog posts I've missed while I was computerless. And by the time I finished there was some light and I could take this 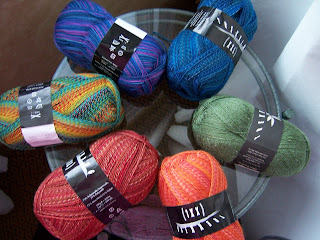 ...a mess of Trekking. Someone and I went in on an order from Astrid's Dutch Obsessions, and it was well worth it. We splurged for the priority, signature-required shipping (what if something happened to the yarn?? Can't have that - better get insured) and it still came out to about $9/ball of Trekking. It's only a good deal if you're going to get a lot. (But who would be able not to? Certainly not me.)
Those unpostable socks haven't gotten much further (see above for the newly recovered yarn) so all I have are a fairly boring Regia Mini Ringel pair for sweetie - I've discovered that knitting socks for him is a useful way of assuaging or deflecting any, ahem, guilt I might feel from my yarn-buying habits. Just don't tell him that's why I'm doing it. 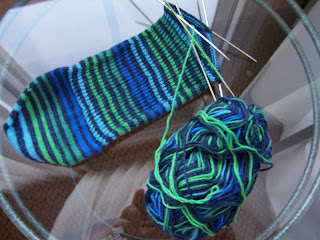 Sorry for the absence! I'm just coming off of 4 days of thinking both my laptop and camera (plus the yarn for my second sock - the mysterious ones I'm not posting yet) were gone forever. It turns out they're not, but I still don't have them, and won't until the weekend. However, I'll be in transit then - the blog pickings are likely to be slim hereabouts. (Oh man, sorry - I've been reading fiction set in the boonies and it's getting to me. I also keep wanting to add "That's what!" to the end of everything I say.) Anyway, point being: no computer + no camera = no posting from me. So hopefully I'll have some dramatic never-before-seen FO picks when I do post!
Posted by rahime at 8/01/2007 10:42:00 AM No comments: Links to this post